Hats off to the reported 30-40 Saudi women who just needed to run some errands today and got into a car to drive themselves: “Saudi women defy ban to take driver’s seat” and “Saudi Arabia women test driving ban”. This article also nicely highlights the huge disconnect between many brave, forward-thinking members of the Saudi population and the way of life imposed on them by the nebulous and paranoid authorities.

June 17 was a planned day of protest against the ban on women driving. What I liked about this action was that they just encouraged women to do their thing; if they needed to get groceries or go to an appointment, just drive themselves (if they know how to drive and have an international driver’s license). No need to parade around and shout slogans. Just live your life like any other woman in the world!

As you’ll glean from these articles, it’s not as if there have never been any women to take to the wheel in the history of Saudi Arabia. There was a protest in the early ’90s, which was quickly quashed. Nevertheless, women commonly drive in rural areas, where the practicalities of farm life simply over-ride any societal expectations of ‘appropriate’ behavior expected of females. Indeed, common sense does sometimes overcome the baffling contradictions of this country. I consider one of camelman’s female relatives a pioneer in shaking away the constraints of the country. It was, perhaps, in the late ’80s or early ’90s. One night, her husband phoned her; he was driving home from another town and was about 50 kilometers away when his car broke down. It was late at night and there was no tow truck he could call. It also happened that the family driver was on vacation. So she went to his closet and put on one of his thobes (a man’s robe) and shemagh (a man’s head gear) and got into the family car to go rescue her husband. Although she wasn’t trying to make a statement about women driving (she was disguised as a man, after all), I think her actions were very brave. If she had gotten caught, it would have been an embarrassment for the family in front of their relatives and friends (although I also think many would have applauded her creative and logical solution).

I am optimistic it will not be too long before a woman won’t have to disguise herself as a man just to be able to drive a car.

riding in cars with boys

It is generally well known that women don’t drive in Saudi Arabia. While it’s not technically against the law for women to drive, it is impossible for a women to get a driver’s license in Saudi. This is the Saudi government’s neat way of banning women from driving.

Why? Some of the reasoning I have heard include: How would she be able to drive safely and do the requisite shoulder checks while wearing the niqab? What if a woman gets into a traffic accident and would have to interact with a male stranger (e.g. policeman, other driver)? First of all, the men are evidently not doing much better with those shoulder checks – Saudi Arabia has one of the world’s highest incidences of traffic fatalities. Second, why not remove the niqab? (This, of course, brings up a whole other issue.) And as for the problem of interacting with male strangers, well let’s just say the work-around is laughable.

Since women can’t drive, many families need to hire drivers. Indeed, there are hundreds of thousands of expat men working in the Kingdom as drivers. By my estimation, most of these men are from southeast Asia, and therefore are probably male strangers. If you’ve read my post about lingerie shopping, you’re probably starting to see a pattern.

So let me get this straight. You don’t allow women to drive because you don’t want them exposed to male strangers. So the solution is to bring in someone from overseas to serve as a driver for your family. They probably come with minimal/no background check, so you need to take a big risk bringing in a driver. The driver may live on the premises and at the very least, will have access to your house and car(s). His job is to drive your wife/daughter/mother/sister/aunt wherever they need to go, and he’s to be available any time of day or night, any day of the week. For this, he might get paid about the equivalent of $400/month (apparently the price varies depending on the driver’s nationality).

Are there alternatives? The public transportation system in Saudi might as well be non-existent, and in any case doesn’t allow access to women. Taxi cabs are iffy, but could be all right if absolutely necessary. Therefore, the only other solution, besides hiring an expat driver, is for the male members of the family to serve as chauffeur. Clearly not a practical, long-term solution. Think of your own family situation and daily routine, and then imagine what it would be like if, on top of your own schedule, you had to juggle the arrival and departure schedules of all the female members of your family as they go to and from school, work, grocery shopping, leisure activities, etc. Not fun.

So I say let us drive! In any case, the traffic can’t get any nuttier than this:

On a more serious note, there is an important protest gaining international attention, led by one brave Saudi woman named Manal Al-Sherif. Hopefully it will lead to some real change.

When in Saudi, you have to get used to the idea that there are certain places you shouldn’t go, depending on whether you are a man or a woman. Of course, there are restricted areas everywhere in the world. Even in North America, I shouldn’t go into the men’s locker room, for instance. But in Saudi, the separation of men and women is everywhere and took some getting used to. You have to be constantly aware of where you can go, which entrance to use, or which line to queue up in. For instance: 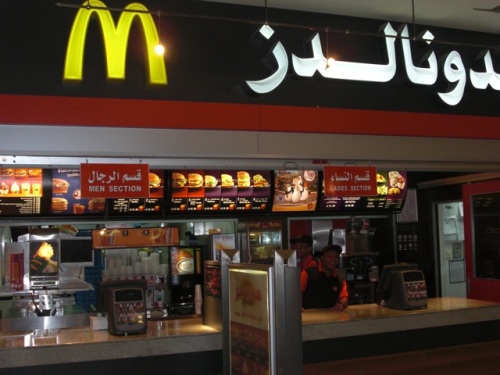 Here, the “Men Section” is strictly for men; that’s easy enough. However, the “Ladies Section” is not only just for ladies, but could also be used by any men who are accompanied by a female. Heaven forbid that a Saudi woman might actually have to stand next to a strange man at the MacDonald’s! But really – as if that sign dividing the line-ups is going to make a difference here.

There are some public places where men are definitely not welcome and the barriers much more defined, such as the ladies’ branch of a local bank:

or the shopping mall, depending on the time: 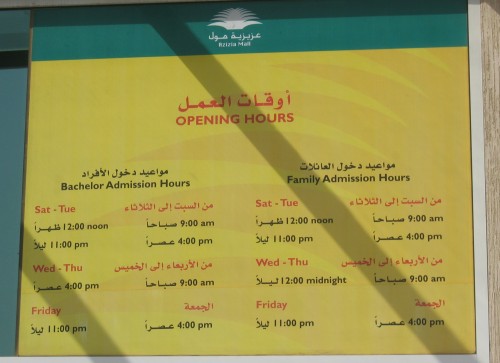 In the old days, according to camelman, the muttawa (religious police) were quite enthusiastic about enforcing these bachelor admission hours. I have never witnessed the muttawa in action, although I have seen mall security guards turn away or escort unaccompanied males out of the shopping centre. I don’t know too many men who are at their best after half an hour or so in the mall, so it’s just as well, I suppose (I’m kidding).

But for all this effort in keeping the bachelors separated from the women, only men are allowed to work in the mall, including lingerie and cosmetics shops. Can you imagine? There would nothing more peculiar than having to ask a fellow if they have any more of the pink lace push-up bras in size 42C.

It’s enough to get anyone in a tizzy!

Every Wednesday night, to start off the weekend, my mother-in-law hosts a dinner for the women of the family. It’s like a girls’-night-in, but without the wine and chick flicks. Her daughters and daughters-in-law are the regulars, along with their daughters and pre-teen sons. The men have otherwise gone out (escaped?) for the evening. Everyone gets dressed up (think fancy blouses and floor-length skirts, although hemlines have been slo-owly, slightly rising over the past couple of years) and the party gets going at around 8:30 or 9 pm. To be honest, I have been to, perhaps, only a handful of Saudi homes for such dinner parties, but from my experience, they all follow a typical format.

The evening begins with Arabic coffee (light coffee flavored with cardamom) and a whole assortment of pastry sweets, chocolates, and meaty, fresh dates. Quite delectable. And I love the idea of having dessert before dinner. Dinner is usually served about an hour later, around 10 or 10:30 pm, and it might be something like this: 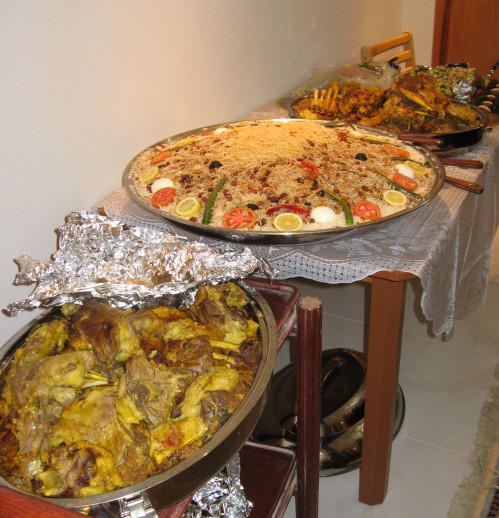 You definitely will never go hungry if you are a guest in a Saudi’s home! This was the first girls’-night-in party I attended and to show appreciation for the guest of honor (who was me that evening), my mother-in-law had a feast of a whole lamb prepared – see if you can spot the lamb’s head in this photo. It was great (the food, not the head). Growing up in an Asian household, I only knew of plain rice. The rice here is flavored with fragrant spices, including cumin, cardamom, cloves, cinnamon bark, and dried lime (loomi). The lamb meat is fall-off-the-bone tender and soft. Good thing that the sweets were served before dinner because there is definitely no room for dessert after these feasts.

I grew up on stories from the 1001 Arabia Nights – Aladdin, Ali Baba and the Forty Thieves. I had a very romanticized vision of the Middle East in my mind and I imagined that I would be mingling in crowded souqs full of color from rich textiles, exotic spices, camel caravans, dust kicking up from the ground – you get the picture. So imagine my surprise and dismay the first time I landed in a Middle Eastern country – glittering western-style malls, American chain restaurants and stores, and fast food restaurants galore. Lots of them.

But if you’re going to have fast food in Riyadh, nothing beats shawarma from Mama Noura. This is not your typical North American over-stuffed, thick-as-a thermos shawarma/donair wrap that’s soggy with lettuce and tomatoes. These shawarmas are only about 5 cm in circumference and contain chicken (or lamb) freshly shaved off the meat stack, garlic mayonnaise, hot sauce, a french fry, and maybe a bright pink pickle (not sure what it is, maybe a radish?) wrapped in a warm, soft pita. And, they’re only 4 riyals each (about $1). Mama Noura is actually a Turkish restaurant (not Saudi) but it doesn’t matter – you haven’t had real shawarma until you tried this.

reflections in the sand
Blog at WordPress.com.